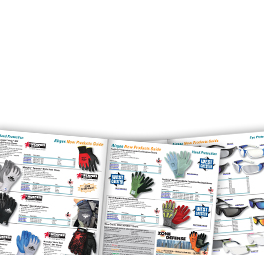 We want to invest in our country and help
re-store America.

I started out selling mostly first aid kits and first aid products, running a route based business selling and servicing existing cabinets and kits. This was something I could do while my children were in school, and it kept my hours flexible to take care of my family and also accommodate my monthly schedule with the South Carolina Air National Guard.

My customer's were happy with the service provided them, they started asking me for gloves, glasses, and other types of PPE (personal protection equipment). We consider ourselves very blessed, we appreciate every one of our customers for their continued support and loyalty.

In 2011, we changed our name to something more global.

The U.S. Safety Stop name fit us being Veteran Owned. Our vision of supporting America by trying to offer an array of American Made Products, which in itself is a work in progress. We want to invest in our country and help re-shore America. Our passion is Protecting America's Work Force. We are working towards our vision, it's not going to happen over night but it will happen in God's time.

Senior Master Sergeant Hawthorne was born in Fort Lauderdale, Florida and graduated from Boyd Anderson High School in 1977.  In July of 1979, Sergeant Hawthorne enlisted in the United States Air Force.  At Lackland Air Force Base, Texas she became a Squad Leader during basic training.  Her first duty station was Royal Air Force Base Lakenheath, England from 1979 to 1981 and worked on the F-111 aircraft as a Weapons Load Crew Member.

Sergeant Hawthorne’s second assignment was at the 4507th Consolidated Aircraft Maintenance Squadron, Shaw Air Force Base, South Carolina from January 1982 through August 1986 where she worked on the 0-2A aircraft.  Her primary job accomplishments were as a Weapons Load Crew Chief on the 0-2A aircraft.  She also performed the additional duty of Technical Order Monitor; maintaining all assigned technical orders, regulations, and publications in an outstanding manner.  In September, Sergeant Hawthorne became NCOIC of the 21th AMU Debrief.  Sergeant Hawthorne’s additional duty was to fill in at the Maintenance Coordination Center as Aircraft Controller.  Sergeant Hawthorne received the David B. Reid Citizenship Award while attending the NCO Leadership School.

In August of 1986, Sergeant Hawthorne was selected to participate in the Palace Chase Program working with McEntire Air National Guard, 169th AMXS Weapons Loading Services, Eastover, South Carolina to finish her commitment with the military receiving an honorable discharge.  Sergeant Hawthorne left the military to follow her husband’s military assignments until his retirement.

Sergeant Hawthorne’s husband retired in 1996; at that time she decided return to the military.  Sergeant Hawthorne returned to McEntire Air National Guard, 169th AMXS Weapons Loading Services, Eastover, South Carolina as a Traditional Guardsman.  Sergeant Hawthorne has completed the USAF PME NCO Academy and SNCO Correspondent Course as part of her Professional Military Education.  She has attended college and made the Dean’s List Spring Semester 2004 in the Business Department of Greenville Technical College.  In October 2005, she completed a 30 hour Occupational Safety and Health Administration (OSHA) course in the construction industry.  Sergeant Hawthorne is a member of the Greenville Chamber of Commerce and on the Greenville Links Board.  She supports the Enlisted Association of the United States and is a lifetime member of the National Guard Association of South Carolina.  In her civilian career she owns and operates a small business called U.S. Safety Stop, selling first aid and safety equipment supplies since 2005.  Sergeant Hawthorne is active in community projects through Riverside Baptist Church where she supports the prisoner packet ministry, shoe box ministry for Ukraine, can goods ministry for her local community, working with the youth, visiting new comers, shut-ins, and hospital visits.  Sergeant Hawthorne is very much supported by her husband of 32 years of marriage, her children, Joshua (age15), and Jacob (age 12).

I started my career in safety equipment at a small family owned business in 1986. Originally hired for accounting, I also embraced customer service and upselling to existing customers. I get personal satisfaction being able to help our customers get the right product for the specific job they are trying to perform and at a reasonable price. I was with the same company up until April of 2011 when I relocated to South Carolina and joined the team at U.S. Safety Stop as Operations Manager. I bring with me 28 years of product knowledge, product sourcing, and a genuine passion for customer service. I think back on those beginning years and we would lovingly call the owner of the business 'Grandma Safety', now I can laugh, because I am now Grandma Safety!